It’s been a long time in coming!

Here are some favorite photos from the event . . .

My wife, Marcie, played the part of official greeter. She spent hours doing her “Een” hair: 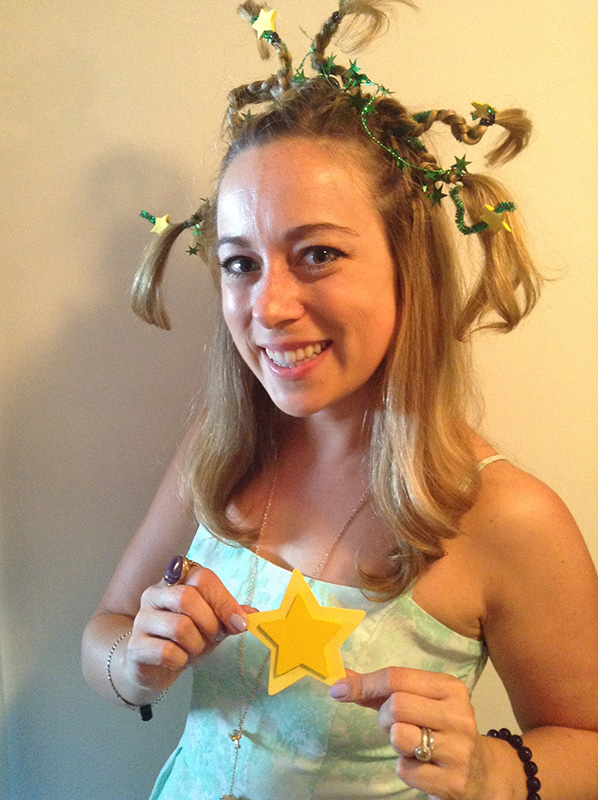 But she wasn’t the only one wearing Een-style braids at the party. In fact, we had an official “braiding station.” Even the boys put braids in their hair. (That’s because everyone—boys included—wears braids in the Land of Een to honor their founder, Leemus Longbraids.)

In addition, all attendees were given a quick form and a name tag so that they could invent an “Een” name. This meant that everyone had his or her own alias for the entire evening.

Here’s the entire series on display, along with the museum of Een artifacts.

What’s a launch without great food? Check out this beautiful Kendra Kandlestar cake, designed and baked by Carrie Bercic.

It was almost a shame to have to cut it. (We ended up removing the Kendra decoration, first.)

Plenty of Eenberry beverages were on hand, too!

There were many activities at the party, including “Pin the braid on Kendra” and “solve a secret code,” but there’s no two ways about it—the most popular station was “Survive the Rumble Pit”, which was managed by my friend, author James McCann. It’s a card game played with Dungeons & Dragon dice. You pick a warrior and a weapon and then battle other contestants. Nothing is more fun that to watch a mouse with an onion try to fight a giant with a pickle. (But, hey, those are all things from the Kendra Kandlestar books!)

As part of the festivities, I did a short presentation on the background for Kendra Kandlestar series. This was a lot of fun because I got to show photos of some of the real-life places that inspired the book and talk about how they connected to Kendra’s overall journey. 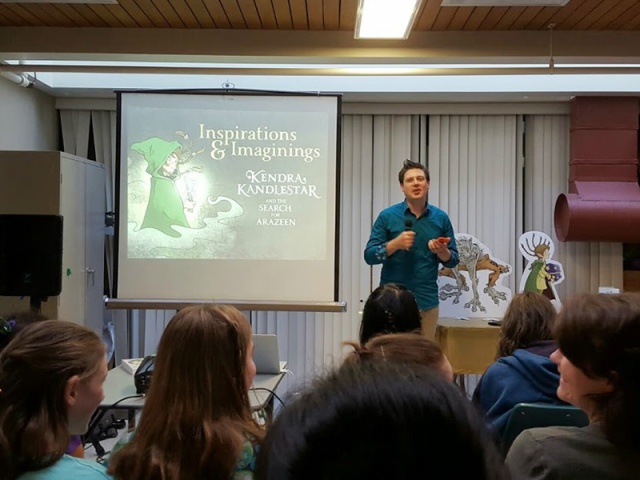 We had a lot of great prizes at the launch, including T-shirts, buttons, and posters. But the grand prize was an original piece of artwork from the book. Here’s a photo of my emcee, Dona, and the winner, Joseph. (He’s looking pretty pleased with himself!)

Of course, the great thing about a launch is that you get things coming the other way. This is a card made by Sarah (or, as it says on her tag, Sarla Sunstar) and her brother. (Looking at this photo now, I see that I was really rocking the Tin-Tin hair that night!)

A big thanks to EVERYONE who helped make this a huge success. I called in all my author friends to help. James McCann ran the Rumble Pit, kc dyer took photos, and Kallie George (who is also the editor of the series) managed the braiding station. And a super big thanks to my actress wife Marcie Nestman who squeezed in all that extra time during a busy week of directing and acting to help with the launch.

Kendra Kandlestar and the Search for Arazeen is now available for purchase or order at your favorite bookstore (mine is Kidsbooks on West Broadway!). You can find out more at the official Kendra Kandlestar website.

I’m a children’s author, illustrator, and specialized arts educator—or, as I like to think of myself, a daydreaming expert. I'm the author of the Kendra Kandlestar series and The Secret of Zoone. During my free time, I'm a traveler, adventurer, and maker of dragon eggs. I live in Vancouver with my wife, son, and unhelpful cat.
View all posts by Lee Edward Fodi →
This entry was posted in book launches and tagged book launch, Kendra Kandlestar, lee edward fodi, New books. Bookmark the permalink.