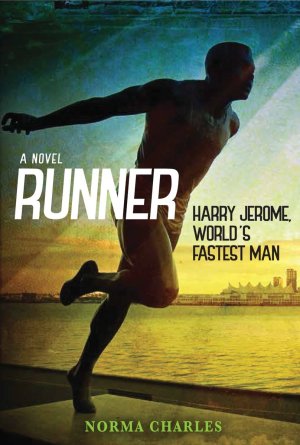 Runner was published by Red Deer Press in 2017:

“Harry Jerome is one of Canada’s forgotten heroes. From a skinny little kid growing up in St. Boniface, Manitoba, he rose to become “the fastest man in the world,” a title he held for an incredible eight years. He achieved this, despite having to battle the prejudices he and his family had to overcome, on account of their African-Canadian heritage.

In this engaging and inspiring novel, acclaimed children’s writer Norma Charles has woven together Harry’s fascinating life story from facts gathered through research, interviews with his family, friends and coach, and also from her own memories of his races at UBC when she was a student there.

Runner is the story of one Canadian kid’s determination and perseverance against enormous odds. As Norma explains: I hope it will serve as an inspiration to youth across Canada.”